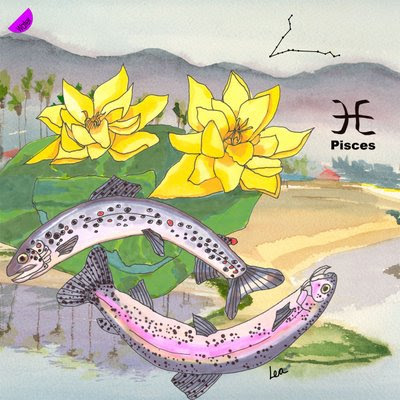 Question: How do two trout represent Illustration Friday's word Pale?
Answer: Through their relationship to Procol Harum's most famous song.

My interpretation of Procol Harem's song "A Whiter Shade of Pale," with lyrics by Keith Reid, is that it is about an affair with a married woman. The lyrics reference Geoffrey Chaucer's Canterbury Tales, Roman mythology and astrology by their mention of "The Miller's Tale," the Vestal Virgins, Neptune and mermaids (who are often represented by the astrological sign Pisces). As evidenced by other websites, including procolharum.com and departmentofuseless.blogspot.com, however, this is but one interpretation of many.

"The Miller's Tale," is about a wealthy, older carpenter who married an 18 year old bride and out of jealousy kept her in a cage. But a younger student Nicholas fell in love with her and cuckolded the husband. The Vestal Virgins were ancient Roman virgin priests of Vesta, the goddess of the hearth, whose primary task was to maintain the goddess's sacred fire. According to Wikipedia, three famous Vestal Virgins were a) the infamous Tarpeia, who was traitorous, b) Rhea Syliva, who was raped by Mars and conceived the twin founders of Rome (Romulus and Remus) and c) Tuccia, whose chastity was questioned. I couldn't find specific reference to the mermaid who took Neptune for a ride but did find that Neptune, the Roman god of water and sea, is considered the ruler of the astrological sign of Pisces.

I did a whole set of the 12 signs of the Zodiac in 2005, the illustrations for which can be found at artistrising.com. They included my pen & ink illustrations of the Sign and Flower (in this case two fish and water lilies), set against watercolors of Santa Barbara painted by my mother, the Element (earth, fire, air or water), Symbol, Sign and an illustrator vector drawing of the actual Constellation.
Posted by Lucy Autrey Wilson at 12:29 PM 2 comments: Links to this post
Email ThisBlogThis!Share to TwitterShare to FacebookShare to Pinterest
Labels: J.L. Autrey + Lucy Ellen Autrey (LEA) Art, Pisces, Procol Harum 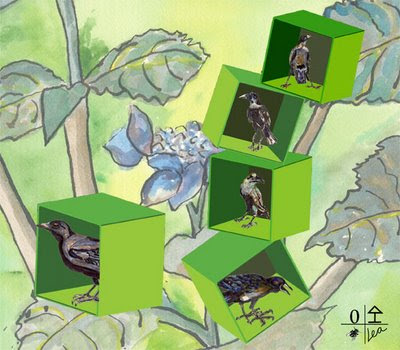